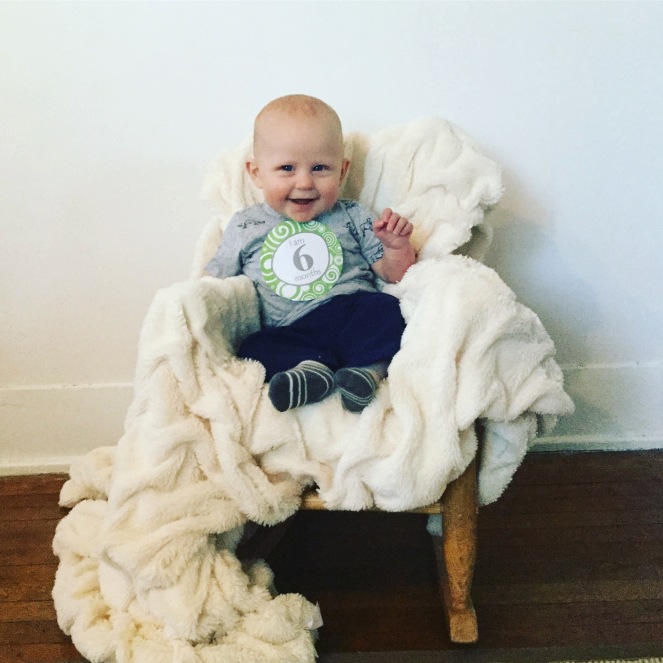 My sweet boy is six months old! This is crazy! He is getting bigger every day. I’m so proud of him – I’m both super excited for each new thing he learns, and yet sad that he is leaving certain stages behind. That’s motherhood I guess!

Deacon’s physical development is taking off in leaps and bounds. He still loves to stand with help and dance around, and he is getting strong enough to pull himself up. He’s only done this with our hands, but I know it’s just a matter of time before he discovers he can do it with the furniture. He can sit upright on his own if we set him down like that, but he can’t quite get himself in that position yet. He has figured out how to scootch himself around. He’s really good at going backwards, and just starting to figure out how to move forwards. It’s kind of funny to watch him – his limbs go all over the place. Check out this video to see him doing it 🙂

My boy is still as sociable as ever. He loves to babble and have a “conversation” with us. He loves being outside, though he is a little skeptical of grass and dirt (I think he has inherited his dad’s aversion to mess!). I just started taking him to a sensory open play time at our local library, and I’m excited to see how that goes. The first one went ok, but he was a little overwhelmed by all of the other babies and adults. 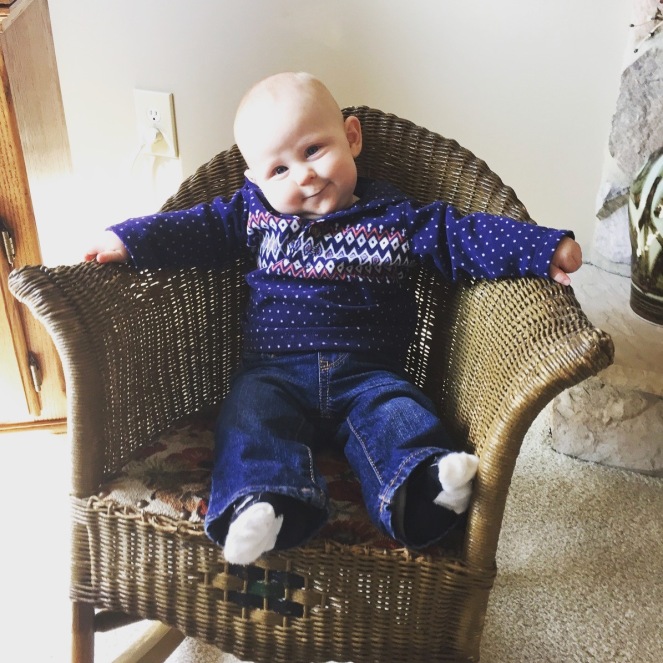 Deacon has started solids! We did end up sticking it out until six months, and are doing Baby-led Weaning. I’m hoping to do a post soon on what it’s been like, but so far its been great, and it’s fun seeing D figure out foods and textures and tastes. He really likes cucumbers and bananas. It is definitely a little nerve-racking watching him chew on hunks of cucumber, but he is awesome at figuring out how to chew it. I’ve also ordered this kit to learn infant CPR so I can be prepared should anything happen. Cory is also certified. Hopefully we’ll never need these skills, but better safe than sorry!

Baby D is also still breastfeeding. BLW advises continuing baby’s regular milk feeds, since they often don’t get a ton of nutrition from the foods they eat until later on.

Sleep has been sort of on-again, off-again in the last couple months. Deacon is still waking a couple times during the night. I’ve been trying to work with him to help him learn to sooth himself back to sleep, but I haven’t had much success because our schedule has been rather crazy with travel, visiting family, and (of course) the time change. It hasn’t been too bad, but I’d really like for him to start sleeping through the night (read, I’d really like to start sleeping through the night!). Fortunately, he goes down wonderfully well for naps and bedtime.

Now that he is figuring out how to move, we need to babyproof! I’m planning on getting some baby gates and cabinet locks, and doing some reorganizing so there are fewer things in his reach. If you’ve got any advice or experiences to share, I’d love to hear your tips!

I’m also hoping to start doing some fun sensory things with him, like playing with different textures and sounds. Pot banging, here we come 🙂

We are a mother/ daughter duo whose personal goals in life are to make our nests places of refuge for our families. Our hope is that you will find inspiration for your own nest as we attempt to share our love of the art of homemaking. 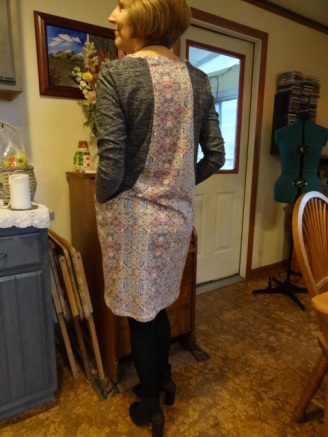 Sew Over It Heather Dress 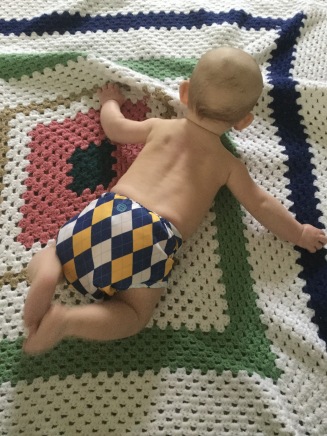 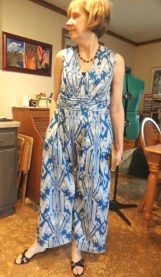